A visit to Ormesby Little Broad on 5th produced at least 1 Garden Warbler which allowed good views.  On 7th a Spoonbill was seen from Breydon Bridge while after work I headed to Filby Broad to look for a Night Heron found earlier by Ken Saul.  I was joined by Tony Stride but as the bird hadn't been seen since the original sighting we weren't optimistic!  However, after an uneventful 45 minutes I spotted the bird in flight although it flew away from us.  Although I didn't get much of a look at the head pattern the pale grey wings and dark back left no doubt about the id.  It then dropped behind trees at the back of the Broad.  Although a better view would have been nice Tony & myself were the only observers other than the finders to see this bird so it was a case of considering ourselves fortunate to have seen the bird at all.

On 16th the highlight of a visit to Ormesby Little Broad was a Drinker moth caterpillar found by Ken Saul and pictured left.  Variable & Blue-tailed Damselflies were also noted.

On 18th news came through of a Caspian Tern at Potter Heigham marshes.  It was a day of heavy showers and the thought of being caught out in the open wasn't very appealing but fortunately somebody had realised that the island the bird was favouring was visible from the boatyard carpark at the bottom of Cess Road, Martham.  I arrived to be told the bird had flown but luckily it soon reappeared and went on to provide good views despite the wet weather.  Caspain Tern is a real brute of a bird and I often refer to it as a Common Tern on steriods!  The huge size and massive bright red bill render it unmistakable!  Hobby and Cuckoo were also noted.

A major surprise on 19th was the finding of a Great Reed Warbler beside the railway line at Breydon north wall.  As I was at work I was soon on site but initially the bird wasn't showing.  Although singing, it was very difficult to hear due to the constant traffic noise.  I returned later in the day and the bird was no longer singing but was now feeding & showing well in bushes the other side of the railway.  As it's name suggests this is a much larger bird than Reed Warbler with a much more substantial bill.  This was a nice unexpected addition to my Breydon List.  Back on the Trinity Broads a male Mandarin Duck was at Filby on 25th. 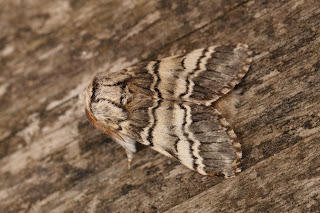 With many cold nights I was only able to run my moth trap on 3 nights and only caught a handful of moths with the highlight being my first Lunar Marbled Brown.  (pictured left.)