After the distant Smew at Filby on January 1st a coronavirus lockdown was announced which put the stop on any birding trips.  However, I did have the good fortune to find a nice Slavonian Grebe from Breydon Bridge on January 23rd.  It only stayed for a few minutes and has since spent almost all of it's time about 2 miles up the estuary near to the pumphouse so this was a rather fortunate find.

Not so fortunate was a brief flight view of a first-winter 'white-winged' Gull which flew over Breydon  Bridge towards the lumps late afternoon on February 12th.  It wasn't identifiable as either Glaucous or Iceland on the poor views obtained but I felt it may have been large enough to be the former although with size being difficult to judge on a lone bird this was one which will have to remain unidentified.

Towards the end of the month I began to venture out again and made several visits to the Trinity Broads with highlights being the long staying Slavonian Grebe still on Ormesby Broad and the long staying Long-tailed Duck still on Ormesby Little Broad. Rollesby Broad provided some new birds with a fine pair of Goosander on 19th and 2+ redhead Smew on the 26th.  Warm weather on 27th produced my first Butterflies with a Brimstone at Ormesby Little Broad and a Peacock outside my house.

I had little chance to take any photo's during this period although a Common Gull at Ormesby Little Broad was the sole highlight. 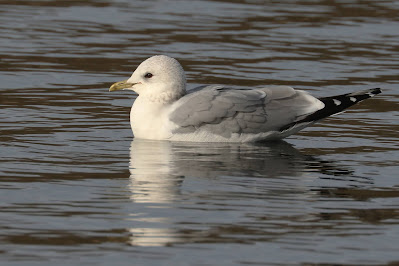