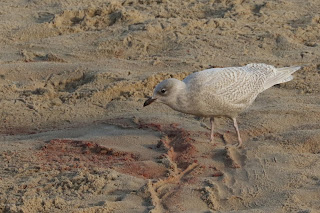 After dipping the Winterton Iceland Gull 2 days earlier I returned on November 27th.  This time I had better luck as another birder was watching the bird on the beach close to rock groyne 58 and I was able to watch it for some time.  1st-winter Iceland Gull  is quite a distinctive bird really only confusable with the rather bigger Glaucous Gull. It is quite a pale uniformly coloured Gull and lacks any black on the primaries.  The all back bill is a distinctive feature compared to Glaucous Gull which has an obvious pink base to the bill with just the tip being black.  The Gull spent some time feeding on some of the afterberth from the many Seals present. 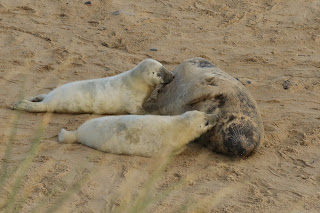 The many Grey Seals on the beach included 1 adult which had 2 suckling pups as in the photo the the right.  Seals usually have only 1 pup so this may have been a rare case of a Seal having twins or, probably more likely, a case of a pup which had moved away from it's mother and took advantage of a chance to feed from a Seal which was not it's parent.
Iceland Gull is a scarce bird in east Norfolk and I believe this is only my 4th in the Great Yarmouth area so a very pleasing bird to see.
at November 29, 2020 No comments:

On a previous visit to Ormesby Little Broad Ken Saul had told me that there had recently been a Long-tailed Duck on Ormesby Broad so that was my first stop on November 26th.  I failed to locate this or anything else of note so I moved on to Ormesby Little Broad.  From the viewing platform I was pleased to locate a red-head Goosander.  Although not a rare bird this is always a nice bird to see locally.

Ken Saul arrived and I walked with him towards Filby Broad.  From the roadbridge we paused to scan the area of Ormesby Little Broad which can't be seen from the viewing platform and Ken quickly located a Long-tailed Duck which we were able to get nice views of.  Almost certainly the bird from Ormesby Broad and probably the same bird which wintered on the Trinity Broads last winter.  A distant Kingfisher was also noted to round off a very enjoyable jaunt out.

On November 25th I made the short journey to Winterton north dunes where an Iceland Gull had been seen the previous day.  I walked to Bramble Gap and back but, despite careful searching, was unable to find the Gull.  Birds were few and far between with just a single Stonechat in the dunes and almost nothing moving on the sea with just 1 Gannet and a small flock of Brent Geese.  As always, it was nice to see lots of Grey Seals on the beach including many with young pups so it proved to be a nice walk even without seeing the bird I had hoped for.

First stop on November 20th was Ormesby Little Broad where I located a few Siskins along the approach to the viewing platform but there was not much else of note except for the expected Tufted Ducks, Pochard & Great Crested Grebes.  Not much was on Filby Broad either soI headed to Billockby to see if I could locate the Goose flocks which had been in the area.  I soon found a couple of small groups of Pink-feet close to the road but with nowhere safe to pull over off the road.  Closer to Acle a Barn Owl was sitting outside it's box in a farmers field.  Returning to Billockby the Geese were flying off and I couldn't find any other flocks on the ground before heading home.

News of a Greater Yellowlegs at Walberswick on Nov 7th had me examining the Covid-19 regulations to see if a visit was allowed under the current rules.  With the bird still present the next day and satisfied that a visit was ok myself & Tony Stride headed to the site in separate cars and met up on site. 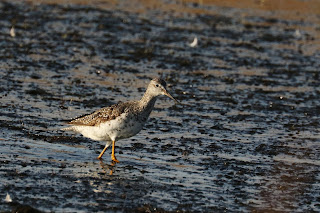 A pleasant walk through the reed-bed (where several Bearded Tits were noted) was followed by a rather more difficult slog north along the shingle beach to the pool where the Yellowlegs was showing very well.  Greater Yellowlegs (as it's name would suggest!) is a larger version of Lesser Yellowlegs but with a somewhat thicker bill and streaking extending on to the flanks.  This was my third record of this American Wader in Britain and just a short distance from Minsmere where I saw my first way back in 1985. 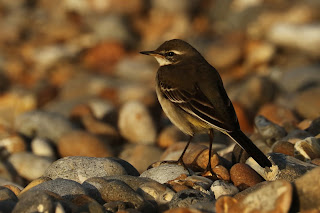 Also present along the shoreline pools here were 2
Eastern Yellow Wagtails.  Amazingly, this was the same place where I saw my first record of this at the same time of year just 12 months ago!  I had brief if very nice views of a fine adult male which I didn't manage to photograph but a juvenile bird showed very well and allowed me to take some nice photo's.  This is a difficult bird to distinguish from European Yellow Wagtail but the buzzing call is quite distinctive.  To complete a very enjoyable trip as we walked back to our cars we had reasonable views of a Bittern on the edge of the reedbed followed by a nice flight view of a Great White Egret.

A nice morning at Burgh Castle.

Having never seen Great Northern Diver on Breydon news of 1 at the west end had me heading to Burgh Castle on November 5th.  Sadly, there was no sign of the Diver but I had an enjoyable morning with a fine ring-tail Hen Harrier, c50 Fieldfare and a Barn Owl all noted.  An elusive Glossy Ibis was also in the area but nobody I spoke to had seen it although, frustratingly, it was seen later in the day after I had left!  Never-the-less, a pleasant morning out. 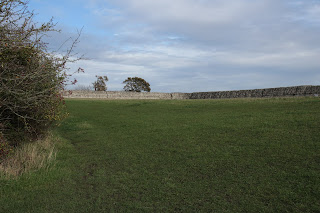 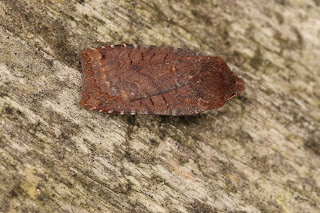 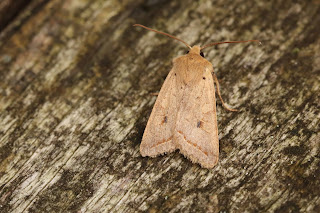 I had already seen Lesser Yellowlegs this year at Runham Swim on September 14th so news of 1 at Cley wasn't especially interesting.  However, when I realised it was showing down to just a few feet I had a change of mind and so, with my photographic hat on, I headed to Cley on October 30th.

The bird was feeding on a flooded field very close to a public footpath and, sure enough, the views were amazing! A distinctive American wader probably most resembling a Greenshank but with longer bright yellow legs and very much more elongated and elegant with a long straight quite narrow bill.. 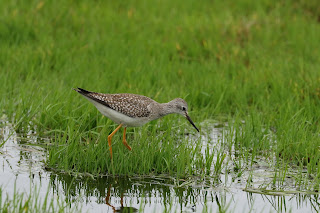 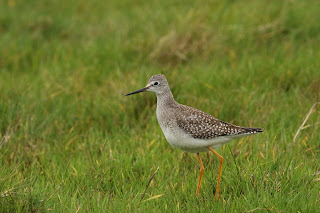 Having had my fill of the Yellowlegs I headed to the east bank where a female Scaup was on a pool although spending most of it's time underwater.  Walking back I spotted an Otter in the drain south of Arnolds Marsh.  After lunch I had another look at the Yellowlegs (and couldn't resist taking yet more photos!) before visiting Dauke's hide.  Other observers had located a nice near adult Yellow-legged Gull but I was more interested in 2 Caspian Gulls which both allowed good views although too far away to photograph.  Caspian Gulls are rather subtle and difficult to identify unless seen well so I spent some time watching these.  Adults are like Herring Gulls but with a small dark eye, no head streaking in winter and often greyish-yellow rather than pink legs.  The other bird was a 1st-winter and like a Herring Gull of the same age but the head is usually whiter, streaking on the nape is more prominent and the legs longer but this a a bird very easy to overlook so I was pleased to get the chance to study these birds for a prolonged period.  A nice end to the trip but  no doubt that the Yellowlegs was the star of the show!
at November 02, 2020 No comments: