As I had to visit Yarmouth on the afternoon of October 23rd I decided to call in to Tar Works Road where my co-worker Tommy Corcoran had found a Hawfinch in the allotments.  When I arrived I was unable to locate the bird but a phone call to Tommy gave me accurate directions and I then soon located it feeding in a Hawthorn.  Good scope views were obtained but no photographs.  Hawfinch is a large rufous brown Finch with a grey nape and a very large bill so quite distinctive.  Although I have seen Hawfinch a number of times this was only my third in the Yarmouth area so a very good record.

On Saturday October 17th as I was getting ready for work I received a phone call from Tony Stride with the amazing news that there was a Rufous Bush Chat at Stiffkey.  Being the first in Britain for many years this was stunning news but I was working over the weekend so nothing for it other than to keep my fingers crossed the bird would stay until the Monday.  (As it happened the bird attracted huge crowds over the weekend so bearing mind the covid-19 situation I was almost glad that I wasn't able to go!)

After discussions with Tony Stride we decided on an early start on Monday morning and arrived on site about 0730 hrs.  Thankfully, not too many birders were present so social distancing wasn't a problem.  Some birders had walked out onto the saltmarsh where the bird had been seen over the weekend but the tide was racing in and they had to beat a hasty retreat with several taking nasty falls in the difficult terrain.  The previous day the bird had been seen early on but to our disappointment this wasn't the case and as time moved on it was beginning to feel like this was going to be an unfortunate 'dip'.  By 10 am the bird still hadn't been seen and things looked desperate but, suddenly, the bird flew past an observer just a few yards from where I was standing, through a gap in a hedge and landed in a field just a few feet in front of other birders!  It then proved to be totally fearless and went on to allow the most amazing views as proved by the photographs below. 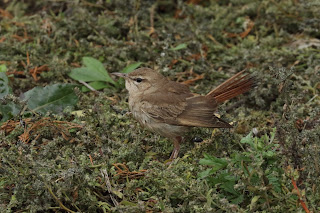 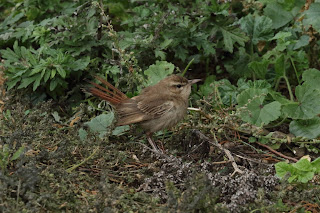 Quite a long legged passerine it had a distinctive posture with it's habit of carrying it's (very worn!) rufous tail upwards at an angle which is well shown by the photographs.  The bird hadn't shown nowhere near as well as this over the weekend so this really felt quite unreal!  After watching the bird for a considerable period of time we retreated feeling that we had seen something really special and unable to believe our good luck!
at October 25, 2020 No comments:

While at work on October 18th I noticed a Spoonbill on 'the lumps.'  Almost immediately it took off and flew west until lost to view.  It was clearly a sub-adult bird as it had obvious black marks on the wing tips .

October 15th found me heading along the coast to Waxham where a Red-flanked Bluetail had been seen.  After a quick look for a Pallas's Warbler which wasn't showing I walked north towards the pipe dump where I joined a small group waiting for the Bluetail.  After a while it dropped down onto a fence and went on to allow very good views as can be seen in the photo below. 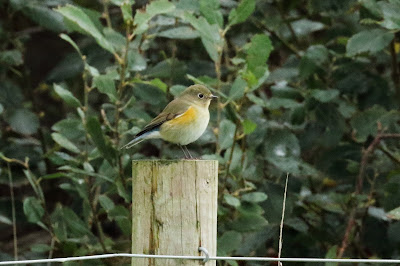 About the size and shape of a robin this is a bird which is well named as the key features are the orange (not red!) flanks and obvious bluetail which make it a very attractive bird to see.  This used to be a major rarity so much so that to see my first one I travelled to Winspit in Dorset.  Just a year later 1 was found in Yarmouth cemetery and since then records have increased so much that it is now almost annual in Norfolk each autumn.  However, it's still regarded as a special bird and always a delight to see.

Pleased with the Bluetail I made my way back to where the Pallas's Warbler was but this was difficult to see spending much of it's time up above head height.  A Goldcrest sized Warbler with a prominent superciluim and yellow rump this is another former rarity which is much more regular these days but again always a joy to see.  To round off the trip a stunning male Black Redstart was around the church but other photographers were approaching too close and although I enjoyed good views there was little chance of photographing it with other people around.

On October 5th I started off at Martham Ferry hoping to see a Glossy Ibis.  East of the fishing pits were several flooded fields which held some nice waders including a juvenile Spotted Redshank, at least 2 Greenshank, c10 Ruff and some Black-tailed Godwit.  On the 3rd field east of the pits I found the Glossy Ibis and enjoyed nice scope views but too distant to photograph.  This is a very distinctive long-legged wading bird appearing all dark at a distance with a long curved bill.  No longer the rarity it was a few years ago this is still a nice bird to see locally.

In the afternoon I made my way along the coast to Cart Gap to look for an Eastern Stonechat.  Eastern Stonechat is generally a paler washed-out version of Common Stonechat with a pale rump and more of a supercilium so almost like a pale cross between Stonechat and Whinchat.  Initial views were distant and unsatisfactory and the bird then vanished but after a lengthy wait it reappeared and allowed reasonable scope views but too far asway to photograph.  'Eastern' Stonechat covers Siberian or the rarer Stejneger's Stonechat and they are considered difficult (or impossible!) to separate but this one was considered by other observers to be the latter.

With easterly winds and rain on Saturday October 3rd it looked like being a promising weekend.  Sure enough, it didn't take long on Saturday morning for news to come through that Rob Holmes had found a Rustic Bunting at Links Road carpark in Lowestoft.  I collected Tony Stride and it didn't take long to reach Lowestoft.  To our delight the bird was incredibly confiding and showed to just a few feet.  Despite the dull weather conditions with light rain it was still possible to obtain some superb photographs.  The most obvious differences from Reed Bunting were the strong reddish flank streaks, white wing-bars and a spot on the rear ear coverts all of which can be seen in the photo below.  This was my 7th Rustic Bunting but my first since 2003. 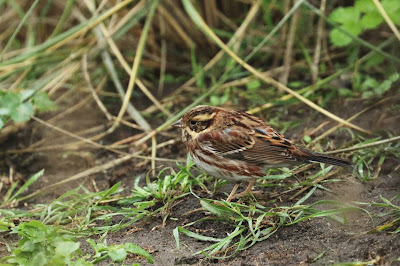 In the afternoon I visited Winterton south dunes.  Lots of Thrushes were mothing but I noted nothing unusual.  Given the perfect weather conditions I wasn't surprised when a Radde's Warbler was found there shortly after I had left!

On Sep 29th I decided to have a wander around Winterton south dunes.  Upon arrival I spoke to a couple of birders who said they had seen 6 Yellow-browed Warblers.  2 hours later and the best I managed was to hear one call just once!  A couple of Blackcaps were all I managed to see leaving me to think that the Yellow-broweds may have been present early morning only and then moved on.