A good start to September.

Birding from Breydon Bridge was productive at the start of September with a Spoonbill on 3 dates and juvenile Curlew Sandpipers also seen on 3 dates with at least 3 birds noted.  Also, on the 8th a single Hobby flew low over the bridge.

Red was the colour of the day on 9th starting with a nice Red Underwing moth in my moth trap.  Although not rare this was a first record for my garden and a nice moth to look at as well.  I then moved on to Waxham where there had recently been 2 Red-backed Shrikes.  I soon located a distant bird but a 2nd bird which had been showing very well had been flushed by a Sparrowhawk before I arrived and wasn't seen while I was present.  Two days later another addition to my garden moth list and another nice moth to look at was a Frosted Orange. 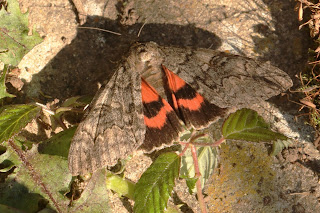 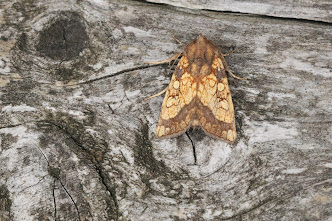 Two visits to Ormesby Little Broad proved enjoyable with 3+ very vocal Hobby, a drake Mandarin and at least 2 Mediterranean Gulls.  A Purple Heron had been seen but had proved very elusive so it was not a surprise that I didn't see it.

On 14th news of a Lesser Yellowlegs led me to go with Tony Stride to Runham Swim which was a  new site for us both.  We arrived to news that the bird hadn't been seen for a while and with a number of pools on the opposite side of the river which could not be viewed it looked like this could be a frustrating trip.  After a lengthy wait a wader flew in and it proved to be the Yellowlegs.  Much like a Greenshank but with longer yellower legs and a thin straight bill and also rather slimmer we went on to enjoy reasonable views but the bird was too far away for me to obtain any decent photo's.

On 18th another trip with Tony took me to Warham Greens between Stiffkey & Wells where a Brown Shrike had been located.  This is an eastern Shrike and used to be a great rarity but records have increased in recent years.  Having missed the only previous Norfolk record I was well pleased to discover this bird showing very well and allowing very good views.  In plumage juvenile birds are much like  Red-backed Shrike (and could easily be overlooked as such)  but the structure is subtly different with short primaries creating a long tailed appearance and a larger head and bigger bill.  Only the second Brown Shrike I've seen in Britain (although I did see adults in China a few years back) I was very pleased with this.   As we walked back to the car 5 Spoonbills flew past lover the saltmarsh. 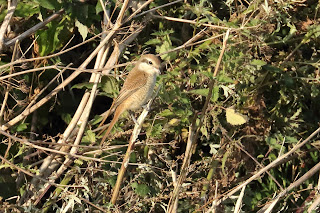 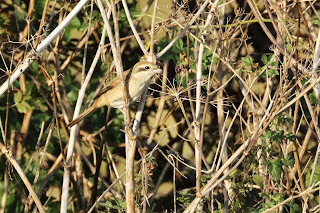 I didn't manage much birding in August with the main birds being seen from Breydon Bridge starting on 16th when Tony Stride rang to say he had found a Black Tern.  I soon found the bird (a moulting adult and still quite black) sitting on the mud alongside a few Common Terns.  Although (like all birds on Breydon!) it was quite distant it was easily identifiable being much darker and more compact that the Common Terns.  Being my first Black Tern from Breydon Bridge I was very pleased with this!  Two days later 5 Spoonbills flew southwest quite low over the bridge.  They didn't hang around as about 30 minutes later they were seen flying over Corton & Lowestoft.  Away from work, a Red Kite was the highlight of  a visit to the weavers way at Hickling.

The undoubted highlight of my garden moth trapping was a Clouded Buff on August 12th.  In Norfolk this moth has it's stronghold in Breckland with only a handful of records from the coast.  However, several were trapped in east Norfolk around this time which indicated this species was undergoing an unexpected dispersal away from it's usual areas.

The carpark at Filby Broad had been closed for some time due to the pandemic.  Having discovered that it had re-opened I visited on August 24th for the first time in several months.  Few birds were noted but I was grateful to Ken Saul for pointing out a mating pair of Cryptotynchus lapothi Weevils which represents only the sixth record for Norfolk.  A pair of mating Willow Emerald Damselflies were also noted.

Above: Clouded Buff was an unexpected addition to my garden list.
Below: Cryptotynchus lapothi Weevils at Ormesby Little Broad. 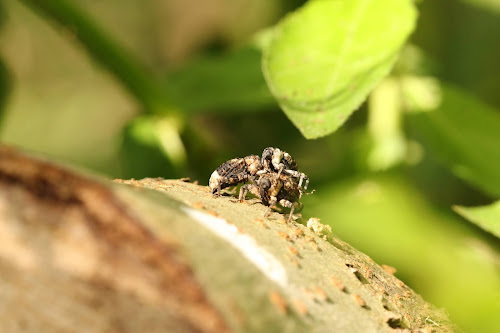