On June 28th Patrick Goffin had the good fortune to see an Alpine Swift fly over his Winterton garden!  For some time there was no further news on the bird so it looked like this would be a typical short-staying fly-over.  However, early evening saw the bird relocated around the village church.  I wasn't aware of this till about 2015 hours but, as Winterton is only a couple of miles down the road, I quickly decided to go for it!  As it was late in the evening I decided not to take my camera.

I arrived by the church to see people looking up at the bird but by the time I had jumped out of my car it had flown behind the church out of view.  'Don't worry.  It will soon be back.!' I was cheerfully informed.  These are famous words which have preceded several 'dips'!  Fortunately, on this occasion I had to wait only a few minutes for the bird to return and went on to enjoy very nice views.  Considerably bigger than Common Swift Alpine Swift seems to me to have 'jerkier' less smooth wingbeats which helped in locating it.  The white underparts were often hard to see against the pale background of the sky but easy to notice when it flew past the dark spire of the church.  Although it flew off a few times it soon returned and had a clear interest in the church tower leading to speculation that it would probably roost there.  It was still flying around when I left at 2100 hrs but people staying on site saw it land on the tower out of sight about 10 minutes later.

Although other people were attempting to photograph the bird I had no regrets over not taking my camera.  Although the views of the bird through binoculars were very good the light was not great at that time of the evening and I felt that a fast flying Swift would be a real challenge for me even in good light! I was delighted just to see such a nice bird just a couple of miles from home.
at June 30, 2020 No comments: 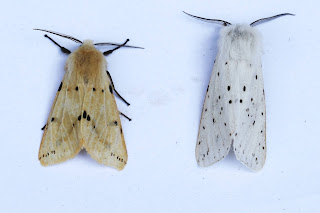 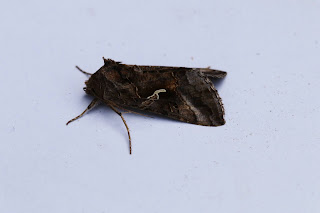 A couple of moth trapping sessions recently have seen an increase in both numbers and species.  It was nice to photograph Buff & White Ermine together while the middle photo shows a Silver Y.  This is a migrant moth which can often been seen flying by day and sometimes appears in good numbers.  Last year on some warm evenings over 20 could be found in my front garden but only a handful ever seen to make it into my moth trap.

The bottom photo is a Pebble Hook-tip.  None of these moths are rare but they indicate the variety of species which can be found.  Scalloped Hazel was a new moth for my garden but sadly flew off before I could photograph it! 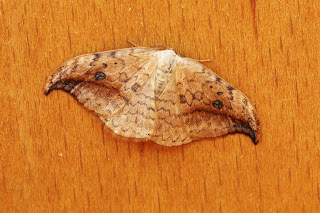 A Shark in my garden!

There weren't too many moths in my moth trap  on the morning of June 10th but my first Silver-ground Carpet had made the session worthwhile.  As I was putting the egg boxes away I noticed a quite elongated pale moth on one of the boxes which was so well camouflaged that I hadn't noticed it on my initial inspection.

This was clearly a new moth for me and I was unsure as to it's identity but reference to my field guides revealed it to be a Shark!  Many moths have what seem to be strange names but this is named due to it's raised collar resembling a sharks fin!  It's not a rare moth in Norfolk but the unusual shape and name help to make it memorable. 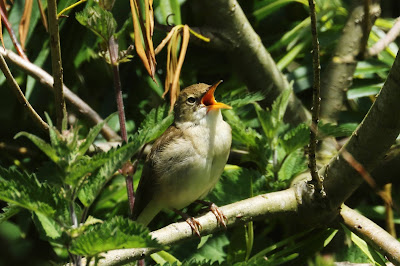 Every birder has a 'bogey' bird which they can't get to grips with and I would say that mine is Blyth's Reed Warbler.  My first attempt to see this species was way back in 1996 which was the first time this species had been identified in the field in Britain.  This was the first of several 'dips' on this species.

I finally managed to tick this species with a brief view of a bird on Bryher, Isle of Scilly, in October 2007, but attempts to see this species locally resulted in nothing but frustration.  Twice I've managed brief untickable views of incredibly sulking autumn birds and I was beginning to think this was a species which didn't like me!

This spring has seen a influx of Blyth's Reed in to Britain so I was hoping for one locally and, sure enough, a singing bird was located at Pigney's Wood NWT reserve near North Walsham.  June 9th saw me joining a thankfully small group of birders and, within just a few minutes, I had enjoyed very good views!  Blyth's Reed is very difficult to distinguish from Reed Warbler but a singing bird like this one makes identification somewhat easier.  Like many birders, I find song very difficult to describe but it was  mostly quite harsh, sometimes Sparrow like, and a few much louder repeated notes almost like a Song Thrush.  Although often out of view, even when singing, at times the bird showed well and eventually it stayed in one spot for about 30 seconds or so enabling me to get some nice photo's.  Years of frustration with this species instantly forgotten!

Eventually I tore myself away from the Warbler and headed to Potter Heigham marshes where a Caspian Tern had been seen.  Upon arrival, it was nice to have a chat with my old friend Andrew Harriss and his partner Tina who told me that had seen the Tern from the riverbank.  While we were talking a Swallowtail swooped past and almost landed on me!  I joined some birders on the riverbank only to be told the Tern had flown off.  This wasn't too disturbing because the bird had a habit of doing this but usually returning quite quickly so I remained confident I would see it.  While we were waiting 3 Spoonbills were on view and another birder did incredibly well to locate a group of 8 very distant Cranes in flight which were so far away as to be only just identifiable!  As time wore on my confidence I would see the bird started to lessen and by late afternoon I decided to call it a day.

The ending to the day may have been disappointing but I returned home more than happy that at long last one of my 'bogey' birds had been well and truly nailed!
at June 13, 2020 1 comment:

Spoonbills are reasonably regular at Breydon and, as I work on Breydon Bridge, I see them there every year.  However, they are always a welcome sight so on June 7th I was pleased when I located a bird just off the end of 'the lumps.'  It was a fine adult, aged by its black bill with a yellow 'blob' on the tip and a yellowish wash across the upper breast.  (Immature birds lack the yellow 'blob' and breast patch.)  This particular bird was a short stayer as when I looked 10 minutes later it was nowhere to be seen.

Also of note the same day was a single Common Sandpiper.  Common enough at Breydon in spring and autumn early June is a strange time to see one here.  It's difficult to decide if it's a late spring migrant on the way to it's breeding grounds or, more likely, a bird which had for some reason failed to breed and decided to make an early start to it's autumn migration.  Sandwich Terns have also been a feature of recent days with up to 25 birds present.
at June 13, 2020 No comments: 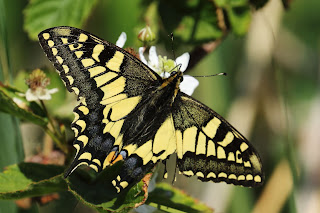 Yesterday I spent a very pleasant morning at Hickling NWT.  I saw several spectacular Swallowtail Butterflies (Britain's largest butterfly and restricted in range to just a few sites on the Norfolk Broads) but sadly the only one which settled for me had a damaged right wing as can be seen in the photo on the left.  Dragonflies included lots of Four-spotted Chasers, Red-eyed Damselflies and my first Norfolk Hawkers of the year.  Like the Swallowtail the latter is another speciality of the Norfolk Broads but unfortunately  none settled for me to photograph.  A few Marsh Harriers were flying
around and I spent some time watching at least 2 Hobby hawking for Dragonflies. These very fast flying Falcons are summer visitors to the UK and Dragonflies make up a high percentage of their   food.  During the previous few days a much rarer Red-footed Falcon had been seen on the reserve which also feeds on Dragonflies.  Some of the Falcons were distant and I carefully scrutinised the birds which came closer but I was happy all the birds I had seen were Hobby rather than it's rarer cousin.  Never-the-less this proved to be a very enjoyable morning out.
at June 02, 2020 2 comments:

Having obeyed the lockdown restrictions over the past few weeks it was nice at long last to do some local birding.  On May 28th a lunchtime walk to Martham Broad was very pleasant even if few birds were noted.  A number of Dragonflies were new for the year including lots of Four-spotted Chasers including one which posed nicely.


Early evening I received a phone call to say there was a Franklins Gull (a rare American Gull) at Hickling.  Unfortunately it wasn't clear if the bird was on the NWT reserve or on Rush Hills Scrape viewable from the Weavers Way footpath.  I decided to try the latter but sadly there was no sign of anything resembling a rare Gull although it was nice to be out on a warm evening and I was pleased to hear my first Cuckoo of the year.
at June 01, 2020 No comments:

A couple of moth traps on May 25th & 28th each produced a new moth for the garden list.  First was a Marbled Brown followed by a Yellow-barred Brindle. These are both fairly common moths but never-the-less very welcome additions to my garden list.