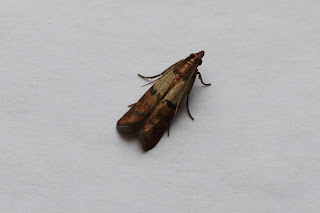 Last night I noticed a micro moth in my kitchen.  I potted it up and this morning, after taking some photographs, was able to identify it as an Indian Meal Moth, Plodia interpunctella.  It seems this is a moth often found indoors and feeds on a variety of foodstuffs.  I suspect it may have entered my house via a large bag of birdseed.

Yesterday, in blustery conditions, I started at Winterton hoping to see Velvet Scoter offshore.  I arrived at the fishing huts north of the car park to find a rope being erected to keep people away from the crumbling edge of the dunes. Fortunately, I was told there was no problem with birdwatchers standing by the huts.  Looking south, the car park cafe is now right on the edge of the cliffs so clearly the recent storms have added to the already significant coastal erosion the area is suffering from.

Pleased with this, I moved on to the Trinity Broads.  Filby Broad was exposed to the wind but while Ormesby Little Broad was more sheltered neither held anything unexpected.  However, I noticed more Chaffinches than normal feeding on the woodland floor and was very pleased to locate a Brambling with them as in many years of visiting this site this is only the second time I have recorded Brambling there.  Considering the windy weather this proved to be a worthwhile morning out.
at February 22, 2020 No comments:

Yesterday, for the first time this year, I ventured across the border into deepest Suffolk.  First stop was Kessingland beach where a Shorelark had been showing well.  The bird had been seen by a shore pool but an hour of wandering around produced only a pair of displaying Ringed Plovers.  It's a very big area with a lot of habitat suitable for a Shorelark so I gave up on this retreated to the nearby sewage works where I soon found a Grey Wagtail and a singing Chiffchaff.

After lunch I headed to nearby Covehithe from where I walked to Benacre Broad.  This was the first time I've been to this area for several years and there has been a massive amount of erosion of the cliffs since my last visit.  There was a well marked footpath along the cliffs but part of this had clearly only recently been swept away by the sea.  The hide at Benacre Broad used to be accessed through a wood but now it's on the beach!  I soon located a nice Great Northern Diver and went on to enjoy good views but too distant for photography.  Little else was present here so I headed back to Lowestoft where I finished the day at Ness point.  I soon found a Rock Pipit and, after a bit of searching, a nice group of 9 Purple Sandpipers to round off a nice day out.
at February 15, 2020 No comments:


On January 31st, along with Peter Ransome and Robert Holmes, I headed to Sweden for a long weekends birding.  Our Ryanair flight to Vasteras (near Stockholm) was uneventful and after collecting our hire car we were soon on our way.  By early afternoon we were at Slagarda where we soon located a distant Hawk Owl.  As all 3 of us had seen Hawk Owl before (and it was a dull day not suitable for photography) we decided we would return for better views later and drove a couple of miles down the road to a site where a Great Grey Owl had recently been seen.  We stayed until just before dusk but sadly the Owl failed to appear before we headed off to our excellent accommodation at Edens Gardens.

On February 1st we returned to both sites at Slagarda but saw neither Owl.  An attempt to drive to a site for Grey-headed Woodpecker was thwarted by a locked barrier blocking the track we wanted to drive down so not the best of starts!   We had better luck at Skillberg feeding station in a pine forest despite light rain falling.  Crested Tits were heard calling as soon as we arrived and there was a constant stream of birds to the provided food.  Blue and Great Tits were most regular but also visiting the food were some delightfully pale nominate race Nuthatches (above photo)and some Borealis race Willow Tits.  Some unfamiliar calls drew our attention to a group of c20 birds which landed high in the tall treetops.  We thought at first they were Crossbills but were puzzled by the strange calls.  The views of the birds were awful but, amazingly, Rob managed a couple of photo’s which, when zoomed up, confirmed we were watching Pine Grosbeaks!  Sadly they soon flew off but we were still delighted because locals had told us there were no Grosbeaks in the area so this was a good find!  Coal Tit, Treecreeper and Great Spotted Woodpecker were noted in the wood and a fine Golden Eagle flew over as did several Ravens.  The star attraction of the feeding station is Nutcracker but sadly none appeared for us.

Next stop was Lake Halsjohn where a Whooper Swan was overshadowed by good flight views of an adult White-tailed Eagle with more distant views of Goshawk and Rough-legged Buzzard.  When we told a local birder we had been to Skillberg and not seen Nutcracker he produced a ‘point and shoot’ camera on which he had amazing photographs of Nutcracker taken a few days earlier!  After failing to see Beavers near Skultuna the rest of the day was spent back at the 2 Owl sites at Slagarda but seeing very little.

Next day as we left our accommodation we could hear Black Woodpecker calling and myself & Peter had very poor views of one flying directly away from us.  This would have been a ‘lifer’ for Peter but sadly this was not a tickable view.  Rob then did very well to spot a perched White-tailed Eagle so a good start!     Back to Skillberg where it wasn’t long before a Nutcracker appeared but sadly it stayed in the treetops and didn’t come to the provided nuts.  Also, a Lesser-spotted Woodpecker was heard calling.  Next it was back to Slagarda where we managed to locate the Hawk Owl and went on to enjoy amazing views.  Almost Shrike like in their habit of sitting on prominent perches they are also quite fearless and allow a very close approach so obtaining good photos was not too difficult.  As we walked back to the car a second Hawk Owl was located sitting at the very top of a tall pine.  Absolutely brilliant!


We had been told of another Great Grey Owl about 45 minutes drive away at Fagasta so decided to head there.  Despite a wrong turn taking us on to a very muddy track used by logging lorries we found the site only to be told the bird hadn’t been seen.  We stayed for about an hour but saw very little.  It was galling therefore to find out after returning home that the bird was seen again the next day!  We finished the day by returning for a second look at the stunning Hawk Owl.


Our final day began well with a good flight view of a Black Woodpecker and also a couple of Tree Sparrows around our accommodation.  Peter was well pleased with the Woodpecker!  Another visit to Skillberg produced 2 more Black Woodpeckers and, finally, a couple of Nutcrackers came to the nuts we had put out and allowed stunning views!  Another visit to the bridge at Skultuna again saw us fail to find Beaver and then on to our final site which was a small feeding station at Ekliden.  Several Northern Bullfinches were coming to the feeders but star here were Hawfinches.  Initially very wary, eventually one flew in and came close enough for a good photo to provide a fitting end to our trip.

This proved to be a very enjoyable weekend away with some excellent birds.  The weather was kind to us (no snow and not too cold) but sadly, despite our best efforts, Great Grey Owl will have to wait for another trip!

Yesterday, on a nice sunny day, I decided to have a wander around Horsey & Waxham hoping to see the long staying Raven.  A morning wander down the Nelson Head track at Horsey produced 2 Purple Sandpipers on rock number 41 and a few Pink-feet plus a single Stonechat.  Hearing that the Raven had been seen at Poplar Farm I drove to Waxham and then walked south to view the farm area from the dunes.  I soon heard the Raven calling (quite distinct from the familiar calls of a Crow) and went on to enjoy quite good views.  Looking much like a large Crow I was able to see the 'shaggy' throat feathers as the bird was calling.  When it flew it seemed to land behind some trees but, despite waiting a while, there was no further sign.  Never-the-less I returned home happy with my day out.
at February 09, 2020 No comments:

No Green-winged Teal at Breydon.

While at work on Breydon Bridge on Feb 6th  myself & my work colleague Tommy Corcoran received a phone call from Peter Allard to say that he had seen a Green-winged Teal from Breydon south wall near the pumphouse and that it had flown east towards the bridge.  At this time of year there are literally thousands of ducks at Breydon east end and trying to pick out just 1 bird was a bit of a needle in a haystack.  Despite searching at regular intervals throughout the day it was no surprise that we failed to find the Teal although a Merlin perched on one of the posts on 'the lumps' was our first for a while.
at February 09, 2020 No comments:

On a nice sunny morning I decided to visit the Pleasure Boat Inn at Hickling to look for a pair of Scaup.  A Kingfisher flew past as soon as I arrived but all the ducks were directly in line with the sun and just dark shapes all  but impossible to identify.  When a fishing boat moved across the broad and flushed all the ducks I feared the worse but the only 2 ducks to remain proved to be the pair of Scaup I was looking for.  The male is basically black & white with a grey back while the female is like a female Tufted Duck but with a large amount of white around the base of the bill. While I was pleased to see these I was disappointed that they remained distant and much too far away to photograph.

In the afternoon a wander around the Trinity Broads produced a high count of c16 Goldeneye at Filby Broad and the long staying Long-tailed Duck still at Ormesby Broad.
at February 05, 2020 No comments: