Yesterday afternoon  I made my way to Waveney forest to look for Short-eared Owls on Haddiscoe marshes.  The viewpoint birdwatchers use is called 'the mound' and from the edge of the forest it offers a great view out over the marshes.  Unfortunately, a strong wind was blowing straight on to the mound making viewing rather unpleasant.  Kestrels & Marsh Harriers were prominent and eventually at least 2 Short-eared Owls appeared quartering the marshes.  As always here, views were rather distant.  At one point a Kestrel chased one of the Owls and both birds flew up into the air before going their separate ways. I would have liked to have stayed longer to see if more Owls appeared  but the unpleasant viewing conditions forced me to leave earlier than I had planned.
at January 30, 2020 No comments:

A blustery morning at Winterton.

Despite rather cool windy conditions I decided to make the short journey down the road to Winterton.  I soon found 2 groups of Snow Buntings on the north beach (about 20 birds in each group) but struggled thereafter.  Two Stonechats were near Bramble Hill but the windy conditions made birding rather difficult so it wasn't a surprise that I couldn't find the Raven or anything else of note.
at January 28, 2020 No comments: 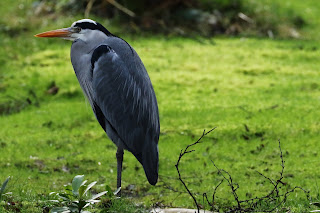 News that a Slavonian Grebe had been showing well from the car park was enough for me to make a rare visit to Wroxham Broad.  Upon arrival I was told by Bob Cobbold that the bird had been present but had drifted round a bend and out of view.  After an hours wait all I had to show for my time was a very distant Kingfisher but eventually the Grebe did reappear.  Views through my telescope were nice but, sadly, it was far too distant for photography.

I then moved on to Ranworth Broad where a noisy work party near the conservation centre put paid to any hope of seeing the Ferruginous Duck.  At least 2 Redpoll and 10 Siskin were in the wood with another Kingfisher beside the road and also a nice close Heron.
at January 27, 2020 No comments:

In Hemsby it looked like a crisp bright sunny morning but when I arrived at the viewing platform at Ormesby Little Broad it was very misty and the mist quickly closed in even more.  A handful of Tufted Ducks were all I could see through the murk.  Crossing the road to Filby Broad visibility was just as bad and all I could see was a single female Goldeneye.  I drove round to Rollesby & Ormesby Broads but visibility was no better so I returned home rather disappointed.
at January 21, 2020 No comments: 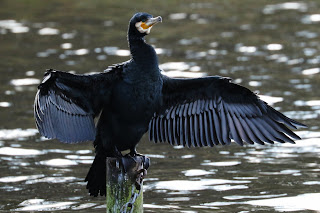 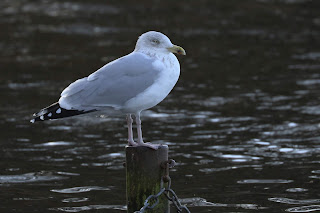 I began today with a drive down Collis Lane but failed to find any Geese.  Moving on to Ludham I found the wild Swans in a field closer to Ludham rather than on the airfield as in previous years.  From a rather muddy pull-in I was able to obtain reasonable views and counted 72 Swans.  Most were Bewick's Swans but with a few Whoopers.  At times the larger Whooper Swans were quite easy to pick out but trying to decide how many of the latter were present wasn't easy but I eventually decided at least 10.

Next stop was Rollesby Broad where I spent some time photographing both Cormorant and Herring Gull from the car park.  I was joined by Keith Dye and John Welsby and the three of us crossed the road to  look over Ormesby Broad.  At least 4 Goldeneye were present and eventually I was able to pick out the long staying Long-tailed Duck which allowed distant views to round off a nice morning out.
at January 16, 2020 No comments:

I began the day by making the short journey to Collis Lane where I was delighted with a flock of 28 Tundra Bean Geese which is the largest group of this species I've ever seen.  Pleased with these I moved on to Halvergate where the Cattle Egret was still in the same field where I had seen it in December.

Next stop was Ranworth Broad where it was nice to bump into Tony Stride but sadly there was no sign of the Ferruginous Duck which had been seen yesterday.  However, it's a good place for common woodland birds and I managed a few year ticks including a small group of Siskin.  Finally, a quick stop at the barn near Billockby produced just 3 Cranes which seemed to be a family party of 2 adults and a 1st-winter.  All in all, a nice trip out.
at January 09, 2020 No comments: 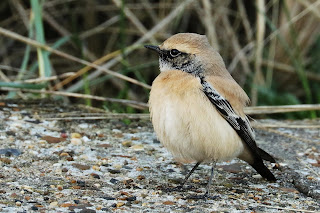 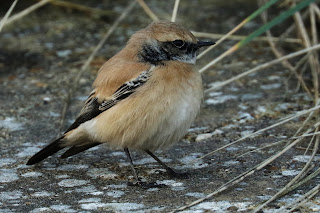 Yesterday I couldn't resist making the short journey to Cart Cap where there had been a male Desert Wheatear for the past 3 days.  When I arrived on the beach there was concern that birdwatchers were getting too close to a baby Seal and the Wheatear had flown off so not a good start!  I was soon joined by Peter Ransome and, after an anxious wait, the Wheatear flew down on to the sea wall and allowed superb views.  It then disappeared again but was eventually refound in a nearby caravan park where we were able to enjoy further prolonged views in slightly better light.

Pleased with the Wheatear I returned to Horsey where there were 4 Tundra Bean Geese with some Pink-feet and, further along the Horsey straight, a nice flock of about 50 White-fronts.  I then moved to Collis Lane, not far from where I live, as Peter Ransome had seen a group of Tundra Bean Geese but they had flown off before I arrived.  A nice way to end the day was news that the Seal pup at Cart Cap had been rescued and taken into care.
at January 05, 2020 No comments:

December, 2019 proved to be a surprisingly productive month starting with the Black-necked Grebe at Filby Broad and a Cattle Egret at Halvergate  before a couple of twitches for the amazing Black-throated Thrush at Whipsnade zoo followed by a 'Norfolk tick' in the shape of the Eastern Yellow Wagtail at Sedgeford.  Here's hoping the run of good birds continues into 2020!
at January 01, 2020 No comments: